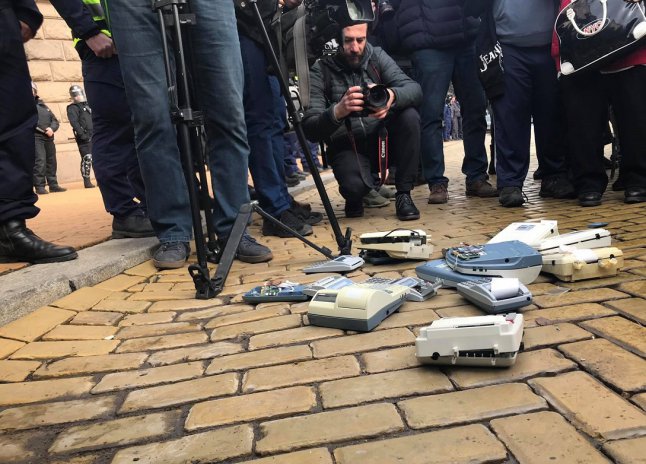 Hundreds of small and medium business owners from the hospitality industry protested in Sofia this Wednesday. The protesters gathered in front of the Council of Ministers’ building and later marched via Tsar Osvoboditel, through the Parliament building and ended up blockading Orlov Most.

The reason for the march is a new rule for online financial reporting - the N-18 regulation. The N-18 was supposd to come into force on January 31 but this Tuesday Financial Minister Vladislav Gouranov announced the government will postpone the enactment another six months. PM Boyko Borissov ordered the financial ministry to put the regulation on hold amid the growing discontent from the business sector, as well as from primary care doctors, who also joined in against the new rules.

This is the fifth time the government has put off implementing the new measure.

Even though Minister Gouranov announced Tuesday the rules will not come into force for at least another six months, and follow up reports emerged that the protest will not take place, protesters still took to the streets. Most protesters wore yellow vests, likely echoing the Yellow Vest Movement that started in France in 2018.

The new regulation mandates new online cash registers, which will report in real time all transactions to the National Revenue Agency. The cash registers will be equipped with a special sales management software.

Business owners have been warning (and protesting) for months that the legal framework which governs the new way of financial reporting is ambiguous, contains a number of contradictions and – in many cases – leaves too much room for interpretation. Until the rules are crystal clear and all contradictions are resolved, the regulation should not be enacted, opposers say.

In the case of medical professionals, there is a very basic problem. If the N-18 regulation enters into force today they would have to choose. The first option is to equate their existing medical software with the new – universal trade – software. The second is to opt for eased terms, which would allow for the medical software and register to stay separate. In the first case they would run the risk of shutting down operations entirely in case of software malfunction. Also, the National Revenue Agency would gain access to sensitive medical information. If they choose the second option, the medical facilities would be unable to treat uninsured patients.