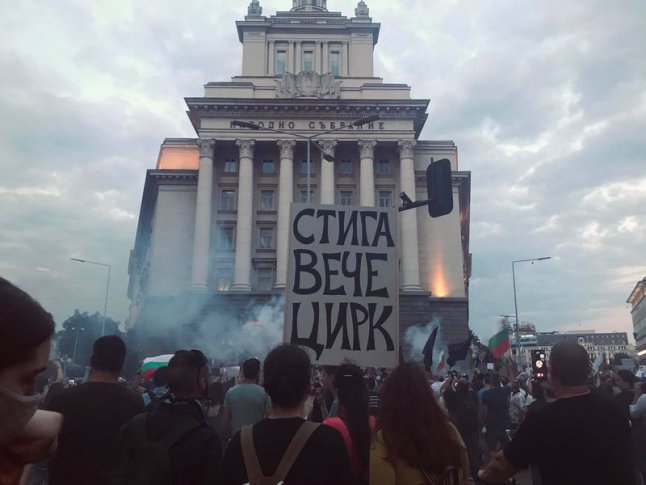 Bulgaria is seeing the largest anti-government protest wave since 2013. Then, protesters marched for more than a year, after Parliament voted to appoint media mogul and Movement for Rights and Freedoms (DPS) MP Delyan Peevski as head of the State Agency for National Security. Peevski and the honorary leader of DPS Ahmed Dogan are seen as a point of singularity in terms of the entanglement between the powers of the state, especially the executive branch and the Prosecutor’s Office - and oligarch interests in Bulgaria.

This time, the protests sparked when the non-parliamentary opposition coalition Democratic Bulgaria’s co-leader Hristo Ivanov landed on the beach at Rosenec, where Ahmed Dogan’s multi-million-leva mansion is located. Although the beach is state-public property, access to it has long been restricted, and the whole area under heavy security. The National Service for Protection, as an exception, have provided Dogan’s and Peevski’s security. The fact that the NSP provides the two’s security has been a public secret, but no one official has ever confirmed nor denied. The question again arose, as guards, whiclh were later confirmed as NSP officers met Ivanov on the beach. Later, President Roument Radev went public and confirmed the two are guarded by the NSP. Coincidently, the Prosecutor’s Office raided the presidency building the next day and arrested two of Radev’s staff.

The two events, along with several instances of severe police brutality during the third day of the protests, generated a massive protest wave, which is likely far from its peak.

Amid the growing protests and seeing as the public had reached a tipping point – Peevski and Dogan announced they will no longer use the service, but the protest and already gained massive momentum beyond the particular act of inexplicable security detail, funded by the taxpayers.

On the fifth day of the nation-wide protests, with thousands demanding Prosecutor General Ivan Geshev and PM Boyko Borissov’s resignation in particular, as main enablers of Peevki’s and Dogan’s vast behind-the-scenes power in the country, the U.S. Embassy in Sofia issued an unprecedented statement in support of the protests.

"The right to peacefully assemble is a fundamental democratic value. Demonstrations and protests are a sign of a thriving, vibrant civil society […] Every nation deserves a judicial system that is non-partisan and accountable to the rule of law. We support the Bulgarian people as you peacefully advocate for increased faith in your democratic system and promote the rule of law in Bulgaria. No one is above the law", the statement read.

The European Commission also backed the protests. Spokesman Christian Wiegand said "the EU always claimed peaceful protests were a fundamental right in any democracy. We support the right to peaceful protest."

On Tuesday Ambassador Hero Mustafa and PM Boyko Borissov met briefly in the Council of Ministers building but no statements were made on either side after.

Although one of the main targets of the protests is Prosecutor General Ivan Geshev, he tweeted a rather curious interpretation, and thanked the embassy for the support as if it was directed towards him. Indeed, he wrote, no one is above the law, and promised that every Bulgarian citizen will find this to be true once more, today.

Around noon the spokesperson for the Prosecutor General Siyka Mileva made a lengthy statement, reveling what Ivan Geshev meant with his tweet from earlier.

Mileva announced the Prosecutor’s Office is opening an investigation for treason and released a number of recorded phone conversations between Vassil Bozhkov – former gambling mogul turned fugitive in Dubai, who claims PM Boyko Borrissov and Finance Minister Vladislav Gouranov extorting millions from him in "comfort fee" – an opposition MP Alexander Paunov and the editor-in-chief of the news site FrogNews Ognyan Stefanov.

Ognyan Stafnov published a statement on his site rejecting the claims by the Prosecutor’s Office and said that he spoke with Bozhkov as part of his job as a journalist.

The tapes supposedly prove that the protests are paid by Bozhkov and organized between the three. The allegations, however, have only materialized in the form of a public statement and the release of the tapes. No real charges have been brought. Instead Mileva embarked on a long read of the talking points, which Geshev runs on repeat since his nomination for Prosecutor General last year: that the Prosecutor’s Office will continue investigating members of the government, that the Prosecutor’s Office is under unprecedented political pressure and that they will continue to go after the people, who have robbed millions and billions from the people.

But, the protests saw even bigger crowds Tuesday evening, with protesters continuing to demand Geshev’s and the government’s resignations. Many held sarcastic posters in response to Geshev’s claim they were paid by Bozhkov.

Finance Minister Vladislav Gouranov and Environment Minister Emil Dimitrov both made statements today that the government has no intention of resigning.