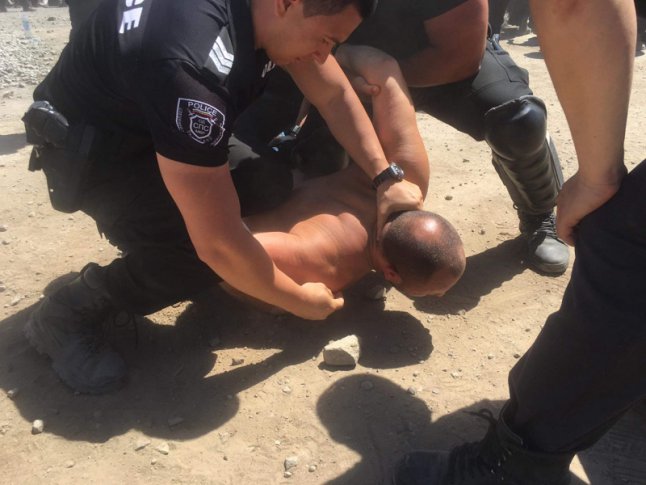 On July 7 non-parliamentary opposition leader Hristo Ivanov debarked at Rosenec beach, and was greeted and removed by guards of the honorary leader of the Movement of Rights and Freedoms (DPS) Ahmed Dogan. The beach is state-public property but access to the site and the beach is practically restricted. The coalition co-led by Ivanov have long since claimed Dogan and DPS MP and media mogul Delyan Peevski are guarded by the National Service for Protection, which provides security for the highest-ranking government officials. The NSP is a service to the president, but decisions to provide protection to other persons is made by a special committee to the service, made of its chief and members of the executive branch.

Ivanov asked the president to confirm Dogan’s and Peevski’s security is provided by the NSP. In a key move, the president made a public statement that indeed they did, the guards on the beach that day were members of the NSP (they refuse to legitimize themselves to Ivanov). The president also added he did not approve but the decision is one of the executive branch, i.e. PM Boyko Borissov.

Dogan and Peevski are known as the epicenter of power in Bulgaria behind-the-scenes. Dogan himself has gone on record to say he personally decided ‘who gets the portions’, as he put it, meaning state contracts. The empire of company rings, connected to Peevski and Dogan receive practically all public procurement in the country. Over the years Peevski built a media empire, acquiring a staggering portion of the Bulgarian news media, thus silencing most free press. He bought news organizations and connected companies through loans from the since bankrupt Corporate Commercial Bank (KTB). The site where Dogan’s mansion is, and where protests today escalated is also purchased by company connected to Dogan with a 20 million loan from KTB, according to extensive reporting on the matter by the investigative site Bivol.bg.

Ruling party GERB, while not in an official coalition with DPS, never crosses its path. The two parties vote together, and GERB leaders never mention Peevski or Dogan, especially not in any bad light. The public contracts continue to end up exclusively to companies connected to Peevski and Dogan, questions – if asked – remain unanswered by the ruling party.

Prosecutor General Ivan Geshev is also said to be Dogan and Peevski’s operative. His deeds speak for themselves: befoer his appointment he was the prosecutor in charge of the trial for the bankruptcy of KTB. Although Peevski’s loans were a public secret, his name is only mentioned a few times in passing in the 15’000-page indictment of the case. As Prosecutor General – a role heavily criticized in Brussels as he is virtually unaccountable to anyone by law – he has pursuit questionable cases and has shown unequivocally that the Prosecutor’s Office is no more than a tool to go after enemies and protect friends.

A day after the President Roumen Radev made his statement, in an unprecedented move the Prosecutor’s Office raided the building of the presidency and arrested two of Radev’s staff. The move was seen as retaliation.

People began to gather spontaneously in front of the presidency building to show support for Radev and the institution. Many of his opposers also voiced support. In a way, Prosecutor General Ivan Geshev managed in a single move to unite citizens and political leaders, otherwise in opposition.

The protest in Sofia grew, other cities also followed. Friday night saw clashes with police, videos emerged of police beating a young man, lying on the ground. Reports emerged the man was a law student in Hague, his mother – a surgeon – and father could not take him to hospital for six hours. The father says his son was heavily beaten, has multiple injuries and a severe concussion.

A protest against police violence is scheduled for later today as well.

Also on Friday, hundreds of buses with DPS and GERB supporters arrived in Sofia, amid a recent rapid increase in coronavirus cases no less. The so-called counter protest took place just next to the other one, clearly risking clashes and escalation.

Meanwhile, another planned protest was receiving attention: after Hristo Ivanov’s visit to Rosenec, a Facebook event emerged for a mass visit to Rosenec beach. Democratic Bulgaria had actually informed Burgas Municipality of a protesting event at said time and place, and had received approval. Again, thousands of DPS supporters in busses had already arrived in Rosenec before the protesters. Hundreds of police and gendarmerie guarded the site. At some point the police and protesters clashed. Ivaylo Mirchev, one of Democratic Bulgaria’s members was arrested briefly as well.


Police and protesters clash in Rosenec

On Saturday afternoon PM Boyko Borissov suddenly called for Dogan and Peevski to be stripped of their NSP security details, although he spent much of a press-briefing the previous day to claim the entire NSP is under the president’s management. He called for committee, mentioned above, to meet as soon as today to make the decision.

Just about the same time Dogan and Peevski issued statements they no longer wish to receive protection by the NSP, because they "no longer trust the principal of the service."

A little later in the day, President Roumen Radev gave an emergency address, calling for the government and Prosecutor General Ivan Geshev to resign.

"The decision by the ruling party to organize a rally it its support immediately next to the citizens’ protests and in the same time is a targeted and unacceptable provocation to civil peace."

"The corruption, the instilment of fear, the prosecutorial racketeering and inaction towards larceny, crushing the presumption of innocence, the suffocation of free speech, the unscrupulous lies, and the lack of justice are what took Bulgarians to the streets" Radev said.