Kremlin Watch is a strategic program of the European Values Think-Tank in the Czech Republic. It aims to expose and confront instruments of Russian influence and disinformation operations focused against Western democracies. Mr. Jakub Janda, executive director of Kremlin Watch, said in an interview for Mediapool that apart from the economic sanctions, the West did close to nothing to punish Russia for what it is doing.

Mr. Janda, are the Western media too obsessed with the issue of a powerful Russian subversive activities in Western democracies or Russia is a real threat to liberal democracies in Europe and the USA?

It is no speculation that the Russian Federation has been attempting to undermine the liberal democracies and the trust of European and American citizens to their democratic institutions. Evidences of these attempts exist, from several Western countries. We should not be discussing if the threat exists at this point, but what can be done about it. If there is something that the Western media should change, then they should do more investigative work on the issue.

Would you, please, specify the final objectives that lay behind Putin’s strategy towards the West and the "near abroad" region according to your foundings?

Vladimir Putin wants to stay in power as long as possible and he wants to leave his print in the Russian history. In order to do that, he needs the Russian population to be submissive to his rule. That is why he needs the countries surrounding Russian borders, like Ukraine or Georgia, not to become examples of successful democratization with prosperity hand in hand. And as we very well know by now, the situation in the Eastern Partnership countries is dependent, in many aspects, on the approach of the West. If the EU Member States and the United States lose interest in them, stop supporting them and become tolerant to the Russian aggression there, it will be much easier for Putin to stop or even reverse their progress and link them closer to the Russian Federation, by conventional or unconventional means. That is why the Russian President needs the West disrupted, weak and fully preoccupied by its internal problems.

Do you think that Kremlin has enough financial and other resources to do all the largescale subversive activities that are ascribed to it? Are the Russian hackers and Mr. Putin really so mighty and is the West so vulnerable?

Not all of the tools the Kremlin uses for subversive activities are particularly expensive. Furthermore, it has a lot of proxies and dedicated little helpers inside the Western liberal democracies which help promote its influence. The problem is not Putin's might, but the fact that the West recognizes democratic principles, values and freedoms, as it should. The Kremlin takes these principles and turns them against Western societies.

Do you think that containment, isolation and confrontation are the best policy response of the European countries and the US towards Russia? Has the West made some mistakes in the last decade in its policy toward Russia?

In European countries and the United States, there is a lot of effort and discussion connected to resilience-building, education and other soft tools of defense against Russian influence. Some states, like the Baltic Countries, also set very good examples with pro-active counter-measures and using governmental and non-governmental institutions for strategic communication, exposure of the Russian proxies etc. This is all good and useful, but it is not enough. Apart from the economic sanctions (which are significantly stronger on the side of the United States than on the side of the European Union), the West did close to nothing to punish Russia for what it is doing. In such a state of play, it is not to be expected that the Kremlin will give up its strategy. More countries should find political will to impose the Magnitsky Act, to freeze assets of Russian oligarchs contributing to the subversive activities, to expel Russian agents from their soil. The means are various, but rarely any of them are systematically used.

The reasons for softer approach towards Russia differ from country to country. Often this is a result of close economic ties the country does not want to lose. Strategic deals, especially in the energy sector, with Russian state firms, often lead to partial or complete capture of the political elites and gaining their loyalty to the Russian regime. In some cases, the leaders of European countries are even getting inspiration in Russian authoritarian ways. Furthermore, even now we have countries which consider Russian interference a problem, but not of their own – they only consider the Eastern Europe to be the target of subversion. This is a mistake and many Western countries (like France or Great Britain) only realized that after their own internal democratic processes were attacked.

When it comes to Bulgaria, there is an obvious internal political division with respect to Russia and the stance of the government remains ambivalent. Partly, this might be caused by the historical and cultural ties to the Russian Federation, but mostly we believe that Bulgaria is one of the countries which avoids disaffecting Russia too much because of the economic relations, despite growing increasingly aware of the threat. The Russian interests are deeply penetrated in the Bulgarian economy. 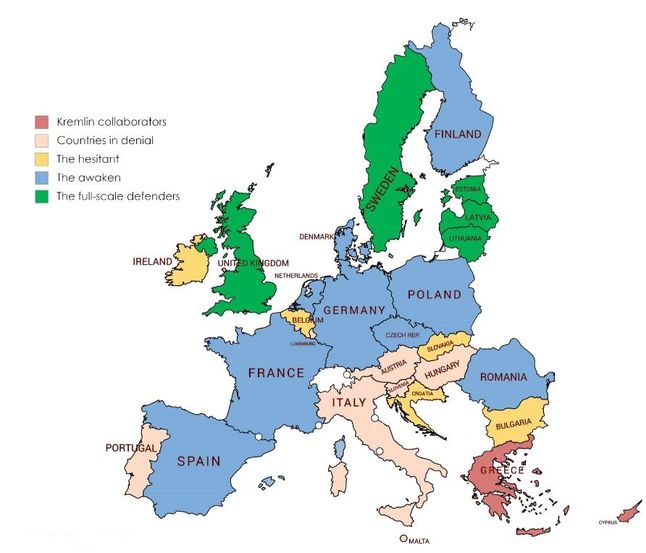 There are some voices in Europe that not Russia but ISIS is the main theat to the national security. According to reports of Kremlin Watch there is a divide between national security and intelligence professionals, on one hand, and the majority of the political elite and the public opinion, on the other, about the perception for the Russian threat. Why? Is there any possibility that the intelligence is wrong or the public opinion is too naive?

Both Russia and Islamic extremism and radicalism in general are serious threats the West has to face, but focusing on one does not mean we should underestimate the other. The security and intelligence communities have better understanding of this than the public or the political elites, because they are capable of dividing the security interests from economic gains. The public opinion is being constantly targeted by Kremlin's manipulation and building resistance against that is a long-distance run. Of course, some of the aspects of the Russian modus operandi and other information cannot be directly shared with the public by the intelligence community, this is one of the basic standards of the counter-intelligence agencies work.

What is the difference between the Russian strategy to exert influence in other countries and the strategies of other major players on the world stage – the USA, China, EU? Do Russian and Chinese strategies differ?

The approach of the Russian Federation and China is similar in many aspects and they often seemingly cooperate with each other, or at least have the same targets, abuse the same vulnerabilities. However, their modus operandi is certainly not comparable to the one of the United States or the European Union. None of these powers is actively trying to undermine Western democracies from the inside. There is a difference between using soft power to spread one's influence and using illegitimate means to decompose internal processes of other countries, not even mentioning the fact that Russia conventionally attacks and occupies pieces of territories of its neighbors.

Taking into consideration the annexation of Crimea in 2014, is there any real danger of a new future Russian military agression in Europe or Asia?

Russia is becoming bolder and bolder. If the West stays passive in the long-term, this possibility should not be taken out of the question. The Baltic States are well aware of that and try to do everything possible to prevent such a possibility, or at least to prepare for it.