The 56 day of national anti-government protests were planned to begin early in the morning in Sofia to greet MPs on their first day back from summer break. Thousands gathered around the new Parliament building, where MPs had their first sitting in a newly renovated hall as early as 8:00. President Roumen Radev spoke to Parliament and urged the government to resign, while MPs from the ruling party GERB and its coalition partners, the far-right nationalists from NFSB and VMRO demonstratively left the hall when Radev took the floor.

The demonstrations continued throughout the day and well into the night. Reports emerged of participants, beaten and detained by police. At least one reporter was detained and heavily bruised and he claims to have legitimatized himself a number of times to the police to no effect. A reporter for bTV and cameraman were sprayed with pepper spray, BNT reporters have also been injured. Sometime after 3:00 the following morning police dismantled the tent protest and blockades at the iconic Eagles Bridge in Sofia.

The blockades on two other key intersections – all erected more than a month ago as part of the nation-wide anti-government protests – have been lifted by police forces. 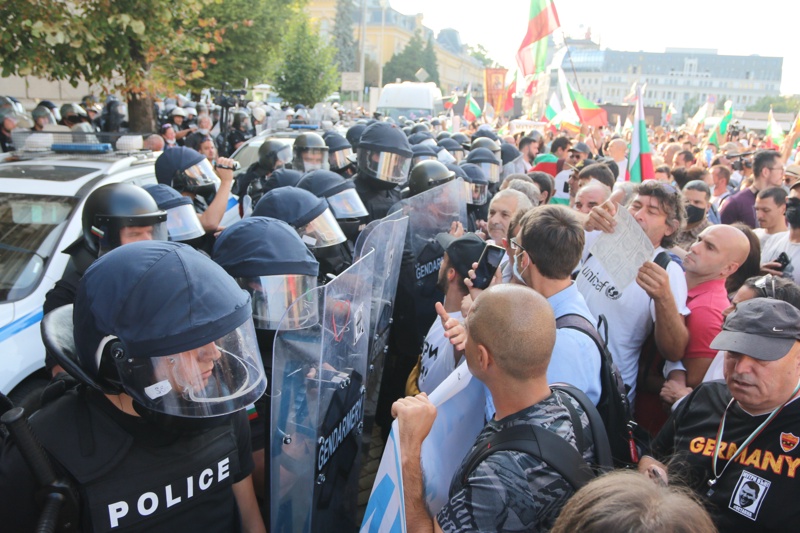 Clashes with police began early on, at about 10:00 in the morning. The area around the building where the new Parliament hall resides, was heavily guarded by police and gendarmerie forces. By morning it had become apparent that the police’s goal would be to contain the protesters only in the immediate are of the building. Most entrances to this space were blocked by police forces strategically placed cordons. Some protesters tried to penetrate the blockades, resulting in the first clashes between police and protesters.

Protesters threw eggs, tomatoes, plastic bottles and hay at police and the building. Some demonstrators continued to try and break the police cordons but ultimately the latter prevailed. The head of the Sofia Police Department Georgi Hadzhiev gave an emergency briefing during which he declared the "police have decided to use force".

Once the evening approached it became clear the protest was infested with members of the so-called Ultras – hard core football fan clubs, known for their aggression and being very highly organized in infiltrating such events and causing chaos. They caused an escalation by throwing hundreds of firecrackers in the crowd. The police, which was seemingly in the thousands, failed (or did not attempt to) neutralize the provocators.  At the end, athe total number of people arrested or detained, according to the police were 126, mostly not members of the Ultras groups. About eighty people – including police - were injured and examined in the hospital.

While many thousands protested on the streets demanding PM Boyko Borissov’s, his Cabinet’s and Prosecutor General Ivan Geshev’s resignations, Borissov’s party managed to gather 126 signatures to formally introduce GERB’s new constitution to Parliament. It was uncertain till the very end if GERB would manage to collect the minimum of 120 votes, as one of the coalition partners were reluctant. 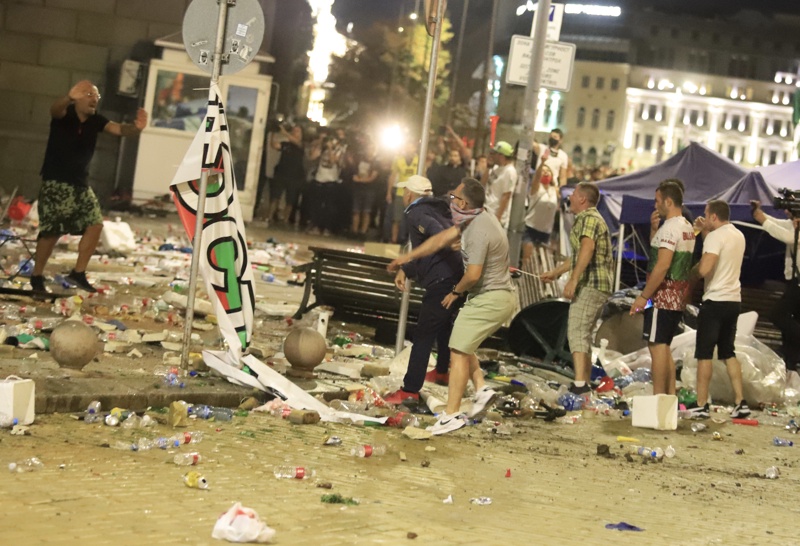 Borissov’s idea for a new constitution emerged in the midst of the nation-wide antigovernment protests. The move was clearly designed to win the PM more time, instead of resigning. The process of introducing a project for a new constitution itself, even if predestined to fail, entails months at the very least. This way Borissov can secure his power on a technicality at least till his term expires.

In order to adopt a new constitution, however, he needs 160 votes, which he cannot collect, as all non-coalition parties in Parliament have declared they would categorically not support it. Even the Movement for Rights and Freedoms, which is one of GERB’s crucial unofficial allies for important legislative initiatives said they would vote against and even demanded the government resign. If Parliament votes with a 160 majority in favor of adopting a new constitution, then a Grand Assembly must be convened. The Grand Assembly does not have a fixed term: its session expires once the task for its assembly has been fulfilled. In this case, the task would be the adoption of a new constitution. However long it takes – weeks, months, years – the country would be governed by this Cabinet, temporarily and indefinitely.

Given the project for the new constitution, it would take a very long time. The texts have been heavily criticized across the board and especially by legal professionals for inconsistencies, contradictions and a number of errors. As the PM said, though, a Grand Assembly could change every word, and could take however long it needs.

Protests are continuing today, with the same demands as before: the immediate resignations of PM Boyko Borissov, his government and Prosecutor General Ivan Geshev.